The helmet is too big in my opinion.

They were big in that time ;D 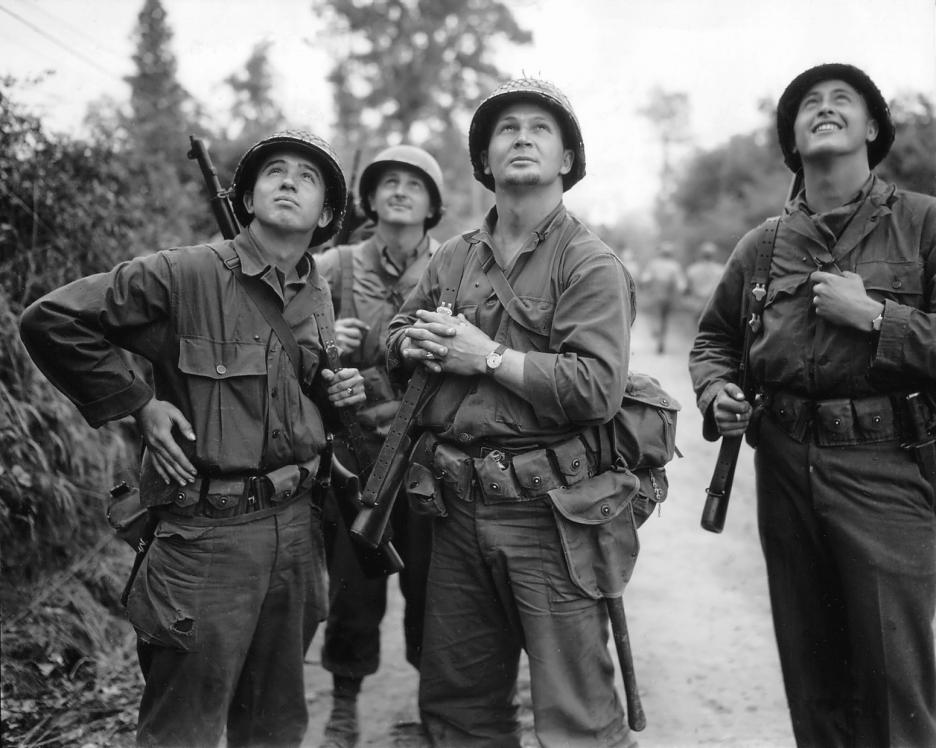 Looks fine though, but I got suggestion about textures.

How about make them little dirty and bloody?

Em, if you are looking for some pictures of things in WWII, then check this website:

They were big in that time ;D

But it doesn’t look that good compared to the small head of the allied soldier model.

What about a net around the allied helmets (and make them smaller)?

Also the thighs are too thin. They look like undernourished skeletors to me.

It just needs to be less large and a bit smaller. Overall It looks good.

I agree that the helmet looks a bit too large. Makes the allied soldier look cartoonish, and less interesting, and doesn’t really suit the art direction of ETQW, imho.

About the character model, I think the texture’s colors could use more variation.

The silhouette is weak. It’s not a terribly important thing, actually, but all of the classes need to have different silhouettes. For the soldier, that will be taken care of for him by his weapons, but for other classes, they need to be carrying things that that particular job would require. Like I think the axis soldier carries a spade, while it is also carried by the allied engineer. The spade does not have to be rigidly bound to the body, but may be bound to the hips, perhaps, so that they are made apparent in interesting ways during animation. That might be wrong, logically, but you should come up with things like that, appropriately.

You’ve gotten the bagginess around the shins and arms to look pretty decent, but the areas where you have lots of tension in reality don’t show, here. If you’re using Zbrush, use the pinch brush, or something, to create little creases in the crotch, elbow, and beneath the glutes. Also, there needs to be some folds in the armpit area, definitely.

The front of the shirt also lacks that completely, when it should have at least a little bit, of undulation that interacts with the pockets–

Also, you’re having a problem with the face. There’s a shading error around the bottom lip. And the furrowed brow, if in fact, it was intended to be furrowed, looks strange and unnatural. The creases seem to go far into the forehead region, making it look like scar tissue.

The vert weights where the forearm meets the bicep, don’t seem weighted properly, in that you not only get shading errors when the arm bends, but you can see the distortion of the topside of the forearm that bends into the bicep, and the bottom of the bicep’s top side, as well.

Where the bicep meets the shoulder is a bit too round, but I feel like that’s probably just my opinion, and not something that really needs to be fixed.

This seems like a lot of ****, but seeing the work you’ve done so far, I think it should be relatively easy for you to fix, if you were so inclined.

Anyway, if you have a low poly version of that bike I’d love to try get it working ingame, may look odd as it would be using player animation for driving the husky but besides that I reckon I could get it drivable.

I was thinking of re-modifying that bicycle I made into that bike. One with the side car, and another that’s just two wheeled. I haven’t messed with a 3 wheel vehicle in ETQW. I don’t even know if you could do that. But I’m not home in LA until Tomorrow, so I’ll mess with it then, if the guy I subletted to didn’t steal my desktop, hahah.

It would be excellent if you guys tried to stray from being extremely accurate to WWII. Part of the appeal of playing ET, for me, was not that it was a great WWII game at all, but it was simply any excuse to have an incredibly entertaining, quotable game. How awesome would it to have a semi-steampunk, Zaku-like flying walker for Axis? Nothing would be more appropriate. Literally, nothing. And it would be fun as hell.

But I do get the infantry only direction. : P

No problem to add occult or sci-fi stuff for the axis team, it’s the way Wolfenstein is I think. I absolutly want the nade launchers, mortar, flamethrower, panzerfaust etc into the mod.

I also think the 3 wheeled vehicle is completely possible, I see no reason it wouldn’t, just make a four wheel-ed vehicle with the front right wheel acting like a back wheel and you’re done. It’d be nice to have a cool motorbike to drive with.

About the lip and brow bugs, it’s the ETQW soldier head model so don’t blame me ^^
And this problem occurs only in my 3D modeller because it’s symmetric UV’s so the normalmap is wrong on one side all the time, it doesn’t seem to work well with my modeller. It’s just a WIP, and the build of the soldier, the texture, the normalmap and the shadowmodel are not finished/done yet, so don’t worry about this, people. The texture can be changed anytime!

It’s quite a pain to rig it and get it right, I’m not feeling great with blender, and the model uses the ETQW skeleton, also the animations are not loose enough in my opinion, the way people handle the gun is also more “modern”.

Thanks for the feedback everyone

Really looking forward to try this out Backsnip

Think you guys do a fantastic job.
Wished I was good enough to help you but I am not

But anyways keep up the good work

Hard to imagine that the helmets at that time were not sized exaclty to your head (always remember, that times are not long gone :P). When i was at army, i got a helmet exactly the size of my head, so it was proportionally fitting my head.

However, if i could choose my head size during war, i would prefer it to be, … well not big that’s for sure

Though i post here, i still think this mod is nothing for me. However i can give my opinion to the helmet, yes. If you look at the pic, the modeled head is a lot less big, compared to the real one. That is why it appears to be so out of proportion, while the helmets are staying almost the same size.

EDIT: also the helmet has two curves if you look exactly. So i pull the smartass and say that this looks more like 2 curves other than just one, oval form, spanning the whole head. But maybe on this pic it just appears to be like that.

I’ve not heard from anyone else on this and I’ve been busy with real life so no progress, the project needs a coder and has struggled to get one since day one, it’s hard to find the motivation after so long in trying.

Hey, I’ve not been active for months. I’m really sorry about that. But there’s too few people on this project anyway and no one is taking the lead, planning etc. It’s never going to get any release without a coder + proper planning.
I’m a student in programming but doing games is not of my skill level right now. Haven’t touched 3D modelling programs for a while too.
Chris is right, it’s hard to find motivation when only few people are interested in your project, and when you have very few material to do some kind of advertising.

Hello mate,
I fear there is unfortunately no real future for this project, but I’m curious about your proposal.
Did you forget to link something to this in your post? Or was your post supposed to contain an image of some sorts?

I think he meant post about the project there.

I’ve been concentrating on finishing my final semester of university which ends next month so not touched any mapping what so ever in ages. In the new year I’ll have plenty more time so I was thinking of having one last push at completing the battery map (along with the city map for ET:QW). Would be nice to see something become of the work we put in even if it’s just ends up being an ET:QW map.

Will you be releasing the axis/allies models too? And weapons?

Will you be releasing the axis/allies models too? And weapons?

And what about the women locked in your basement Chris? Will you release them as well?

I have a quick question about this project. How is the mapping in terms of the objectives? has the mapping tool (guess its similar to the radiant) all entities to make the same objectives as in W:ET? How difficult do you see the switch from gtk radiant to the mapping tool for QW? Can someone with detailed expertise in the radiant get up to speed here quickly? And finally, do you think there will be at some point a QW mod available that mimicks to 100% the style and playability of W:ET? So that a hand full of skilled mapper can have an ET mod for QW where they can make maps for? If so, when do you think this mod would be available.

I have to admit that I would under certain circumstences be interested to make a map here.

The entities are not exactly the same but you’ll recognize a lot of them. Mapping is really easy because you don’t need to compile the map to see how it really looks (camera window renders the same as ingame). Block building and 2D camera management is same as GtkRadiant. So I would say the learning curve is not big. The map scripting is in c++ I think so it’s a lot different from ET. example script

I recommend you read this wiki : http://wiki.splashdamage.com/index.php/Enemy_Territory:_QUAKE_Wars and see by yourself.

It’s probably possible to mimick ET’s style and add even more entities. But for that you need a good C++ programmer with a great understanding of the engine.

Recently you might or might not have noticed a bit of activity on my side.
This means that I’m back in the Wolf:MP mod active members.
I’ll take responsibility over the game’s code. I’m far from being an expert, but I hope it will help bring more attention to our mod.
This makes me responsible for code and 3D assets. It is a lot to take especially on the 3D side where one person really isn’t enough. So any help on both subjects would be really appreciated.

We’ve decided to be more organised to actually achieve anything. That’s why I’d like people to jump on board and help with :

The blog http://developersofcommunity.blog.com/ has not been maintained for a long time. I’m not in the power to take it down, but I’ll never update it again.

If you want the assets, you need to get in touch to access them from the chatroom. Anybody can contribute to the source code from GitHub.

If anybody has ideas to promote the mod, tell me.