And we’re looking for talent across a range of disciplines to help us build the future:

Find out more about the project and see all the open roles: https://www.splashdamage.com/news/splash-damages-new-sci-fi-ip/ 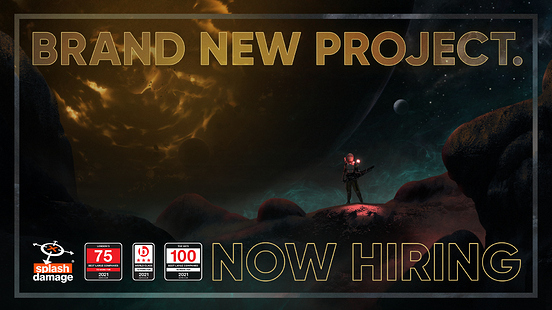 Exciting, is the current artwork a generic sci-fi placeholder or a hint this might be space based?

Very exciting! Can’t wait to see what this is!

OH! no questions… won’t have any answer anyway…so I’ll wait and see …Thanks for letting us know

How long after the release of the game will it be supported for?

It’s hard to get excited knowing history of all past games quickly being left to rot.

Which past games were “quickly being left to rot”? DB was the only in-house game they released, and that was supported for several years which is actually decent for a game in general. Other games such as ET:QW, Brink, the Gears/Halo games etc were ‘work for fire’ games and aren’t SD’s to “support”, it’s up to the publisher to decide whether they want continued support for the game that they commissioned, and in fact SD spent their own time and money working on Brink and W:ET beyond their contracted end date.