Moving the sun & skydome around within a map

I have been playing around by making very high quality 8192x2048 skybox and I was wondering how to change the sun position and the skybox rotation within the SDK? I mean change the positions while actually being in a map to see what looks best instead of pulling a slider in the SDK… Cheers for the answer 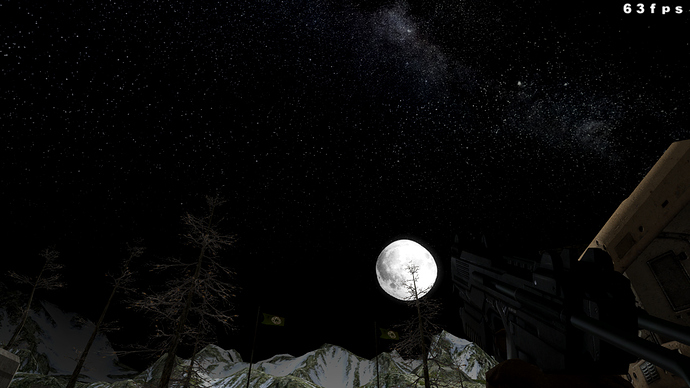 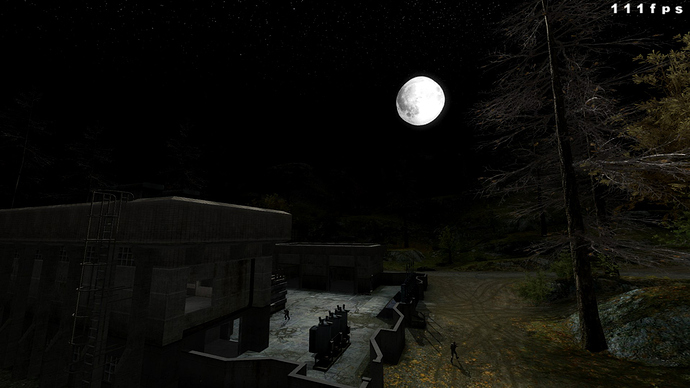 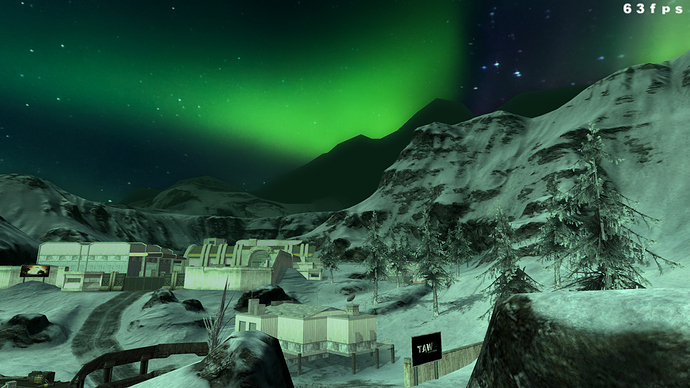 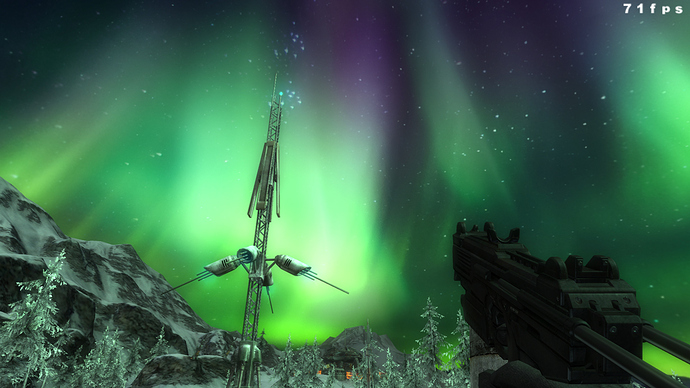 Cheers light_sh4v0r, the northen light version is WIP (lots of blurry stars to take care of), but the night version is pretty much done, the milky way looks very good and detailed. Still want to replace the sun flare with a actual textured (plus glowing) moon, probably need to create a 32 bits (transparant) tga image for that.

Launch the atmosphere editor whilst having a map loaded, you can then edit your sky in real time, sky rotation is the Sun Azimuth, it’s also the light source location, you can unlock the sun sprite and flare to be somewhere else than the source of the light. Try and avoid painting the sun or moon on the actual sky, ones I’ve converted for use in ET:QW that do have them painted don’t quite match up the Sun Azimuth in ET:QW so I had to play around with the unlocked feature to line it up as close as I could.

Are you aware of adding scrolling clouds? you could try use this same setup to add some basic animation to your northern lights, it would basically rotate around the sky dome, ideally you’d set it to a very slow speed.

Are you aware of adding scrolling clouds?

Sounds interesting! Will have to look into that then. I should be able to fully recreate an propper nothen light setting from scratch in photoshop. Since 2 weeks ago I actually started using the SDK for the first time…

And yes i want to cut out the moon, I guess i am having the same issue as you once had. Any options to alter the sun/moon reflection in the water?

Oh btw… how to actually get a map or (preferably) campaign running from the SDK? Do I really need to setup a local dedicated server to able to connect to LAN?

[QUOTE=taw_m0nsta;553465]Sounds interesting! Will have to look into that then. I should be able to fully recreate an propper nothen light setting from scratch in photoshop. Since 2 weeks ago I actually started using the SDK for the first time…

And yes i want to cut out the moon, I guess i am having the same issue as you once had.[/QUOTE]

Look at this page and subsection, http://wiki.splashdamage.com/index.php/Atmosphere_Editor#Cloud_Layer_Materials

I’ve managed to get the material/high_skybox_template working reasonably well, I’ve been using Wolfenstein (2009) as a guide as these additional material templates were never used in ET:QW, basically you need to make an alpha channel “sky” for your clouds or in your case lights in same way you do for the primary sky, so you have a ‘side’ image and a ‘top’ image, I get an odd effect when have something on the top though, it makes the top part of the sky darker than the sides which I need to investigate a bit more, it’s only marginally noticeable as shown below, can just make out the edge of the ‘top’ image. Wolfenstein seemed to avoid putting anything on the top image and just used a black 2x2 image with a black alpha channel. EDIT: found the problem, was the levels in the cloud image, the background wasn’t truly black so wan’t getting faded correctly, however I’ve still decided to use a blank top as the rotating is more noticeable, looks better when used just on the sides.

if you’re feeling adventurous have a look in the skydomes_templates.mtr located in materials/atmospheres/ to see what’s going on in each template, they’re gibberish to me. I only discovered these 2 weeks ago so not got any more experience.

You could probably link this with a scrolling light to add variation to the light source to add more of an effect like how the valley atmpshere using a scrolling cloud light to give the effect of cloud shadows.

Any options to alter the sun/moon reflection in the water?

Oh btw… how to actually get a map or (preferably) campaign running from the SDK? Do I really need to setup a local dedicated server to able to connect to LAN?

Just launch the SDK engine (shortcut is F2 when using editworld), and use “devmap mapname” I’ve never tried playing a campaign in the SDK.

You mean the file that starts with

Templates
Artists: Don’t touch!
Don’t even think of it!

Ok ill have a look into that and probably gonna touch it :rolleyes:

[QUOTE=.Chris.;553489]Look at this page and subsection, http://wiki.splashdamage.com/index.php/Atmosphere_Editor#Cloud_Layer_Materials
basically you need to make an alpha channel “sky” for your clouds or in your case lights in same way you do for the primary sky, so you have a ‘side’ image and a ‘top’ image,[/QUOTE]
Should be able to make alpha’s, but just to get a clear idea, the clouds aren’t really animating, they are just moving a few pixels per second?

And this works basically under the top image of the skybox itself? So this scrolling/fake animation does not apply to the sides of the skybox but only when you look up?

Would be very nice if you could get a working version as an example packaged 0:-) I am able to play around and manipulate/finetune the values of scripts but I can’t can’t really code from scratch…

Yeah, they only rotate, where it rotates depends where you draw the image to be rotated, as with the normal skybox it is made up of a long side image and and square top image, from my tests having something in that top image doesn’t look very good as the rotating is centred about the centre of the top image of the sky so being closer to that centre it appears to spin faster and the effect doesn’t look great, having the it on the side image looks more natural, remember you could have more than one of these setup at different speeds to create some variance.

You don’t change those templates unless you know what they do and want to make your own, the settings for scroll speeds and such are within the atmosphere editor.

Here’s my sky so far, https://drive.google.com/open?id=0Bz50srp1jOjVRC1jOWRuNVpKa3c

best to ignore the dark_ring_cloud section for now, it’s not doing anything yet, also the fog in this atmosphere has always caused my trouble, don’t get how to blend it nicely with the sky and have the low lying. Final note, the clouds image I’m using is from Wolfenstein, I have not clue how would recreate such an image.

Transparant clouds should not be so hard to make, with some basic free photoshop brushes a lot can be done. But making nice clouds that really match up the sky cubes images requires to have a editeble skiebox as well with some releases in between to make some final adjustments. Did a quick look to the cloud image, didn’t looked very special, not sure what chemical_sunlayer_top is doing since its only 6x6px. Will try to test your files in an actual map to see whats going on. Thank you for sharing these files Chris!

It’s so small because it isn’t really required, not point having a large image only containing black but you need 2 images for the template to work, even if don’t plan on having anything up top, if you did it would be a higher resolution with something drawn inside it. I don’t think these clouds are meant to replace the clouds you draw in the main sky but an addition to them.

So far its a bit hard to test my atmospheres within the SDK, even chaning to vanilla atmospheres doesn’t always work, I’m affraid i have overwritten some vanilla/clean sdk files. So what I do is pack them in campaign file, load QWTA+campaign, and then do a setAtmophere darkness (this works perfectly so far) but with your files I end up with a black sky and everything covered in a rainbow oil

(been there before). Guess i’m missing a file right?

So far its a bit hard to test my atmospheres within the SDK, even chaning to vanilla atmospheres doesn’t always work

Never mind, I updated all my last atmospheres and now able to rotate the sun and see the shadows in the map on objects moving around while doing so. Any tips for chaning shadows? I remember a very old topic related to shadow stating ETQW has some flaws in this? Too much shadow can hurt? How do you tell? Cheers for sharing your knowledge Chris

Figured out how to horizontal change the sun without making a different slice of the skydome images. :o
There must be a way to change the vertical position of where to sky image from the skybox bottom side is set right?

Now that I changed the sun location and updated my atmosphere area22_monsta it looks like the shadows from all objects are still outdated… Hmm… I also notice some heavy flickering of shadows. That even probably qw normal flaw since the shadows in vanilla maps are very minimal and you would hardly notice. (made them extra dark on purpose)

Well another finding is that the shadows that are created are linked to the skydome image position. Changing the shadow position is scrolling the skybox when pulling the SunAzimuth. Which is not a major deal but still because im in full control of the raw files, but would be nice to change with them separably since making that image is pretty time consuming.

Results so far. Havn’t managed to get the the scrolling clouds to work but the wind and the minimal snow does seem so create a little glowing effect on the green streams. Also created a custom fog that surprisingly worked out very well. The fog gradient turned out to show itself vertically flipped which resulted in purple fog around high mountains and green fog around the low mountains. 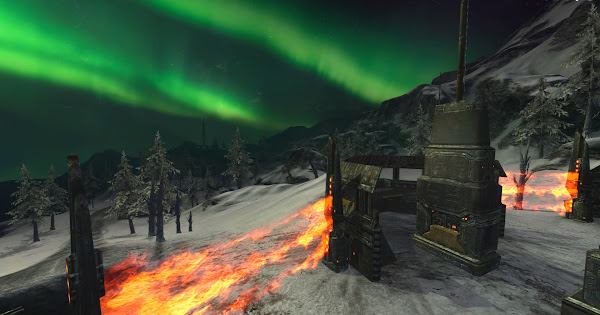 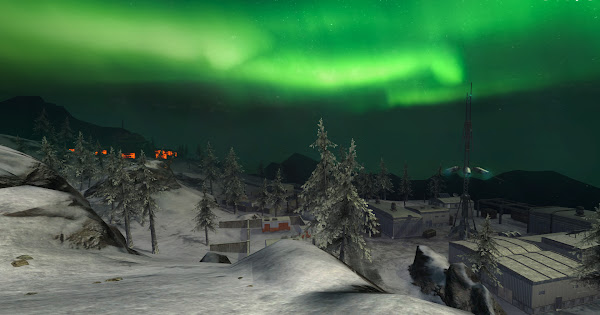 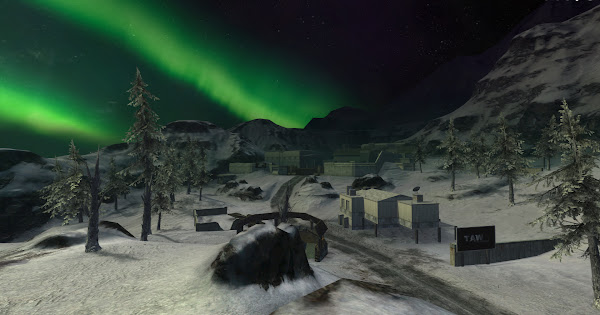