I have noticed something strange going on with multiple servers, but most notably the F|A servers.

This third server appears empty on splatterladder and has 0 / 0 displayed as the amount of players. But in the Global server list, however, this server displays 54 players out of 58 available slots, and when clicking on ‘server info’, it just seems like the server is empty as absolutely no players are being displayed by scrolling down. When connecting to this third server, a message shows up and asks the players to redirect them to the real “jay1” server (8.9.4.227:27960).

How is it possible to create such a fake server that is actually empty and redirects to the real server, but at the same time can display something like “54/58”, which by the way isn’t even the number of players on the real server, which at the moment is “29 (+3) / 51”.

Also, a normal server would display something like ‘ET 3.00 - TB 0.7.4 linux-i386’ on splatterladder next to ‘system’, but the redirect server mentioned above only displays ‘fearless’, which is strange. For every server they have, F|A has a redirect server that looks empty when you click on server info (so players can’t know if the 54 players that should be connected to the servers are bots or not) but actually displays 54/58, or any other fake amount of players.

I’m pretty sure this kind of fake redirect is a custom program made by the F|A team that modifies the Master Server information, as I couldn’t find anything on the interwebz that could do the same. Also, shouldn’t this practice that only F|A guys and maybe a few others seem to have knowledge about be stopped in some way or another ? It seems quite unfair to other admins and just overall a really lame thing to do.

This is nothing new, certain servers/clans have been doing these tricks for years to con people in to joining their servers. There is nothing you can do about it so long as the id master server is online other than feel sorry for the new players that end up as cannon fodder on servers ran by people with so little dignity, so little respect for players that they have to deceive them on so they can get easy kills for rating, for example 8 out of the top 10 rated players on http://et.trackbase.net/ all currently play on the same FA server (8.9.4.227:27960) which the fake links direct people to.

If it’s an issue that has been around for years then why is noone doing anyting to fix it ? Would it be so difficult to remove the fake redirects from the master list or something ?

It would require id to manually filter the fake servers, which is something that is likely not happen. It is also most probably impossible to fix, because it is just too simple to fool the master server.

If it’s an issue that has been around for years then why is noone doing anyting to fix it ? Would it be so difficult to remove the fake redirects from the master list or something ?

There is nothing we can do to fix it. Also, what ryven said. id software don’t give a **** about the game nor master list other than having a machine out back keeping it running that they check every so often to make sure it hasn’t died or is starting to pose a fire risk to the building.

Just to be sure people get what I mean and how unfair it is for other servers, let me illustrate my point with pictures. When new players install the game and click on play online for the first time, their first reflex is probably to sort the servers from the list by player count so the most populated servers get to the top (at least that’s what I would do). The six to seven first servers at the top are then exclusively fake redirect servers from the F|A clan that redirect new players to jay1.clan-fa.com, which is (obviously) the most popular server from the team. 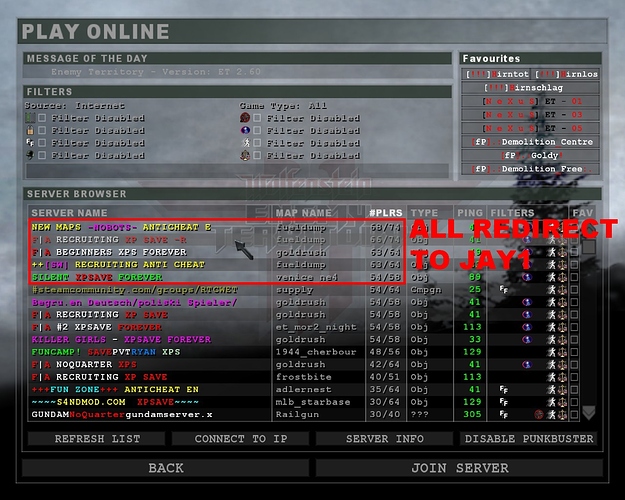 For new players to see if these servers have bots or not, (so they can decide if they want to join or not) they have to click on ‘server info’ and here’s what they see 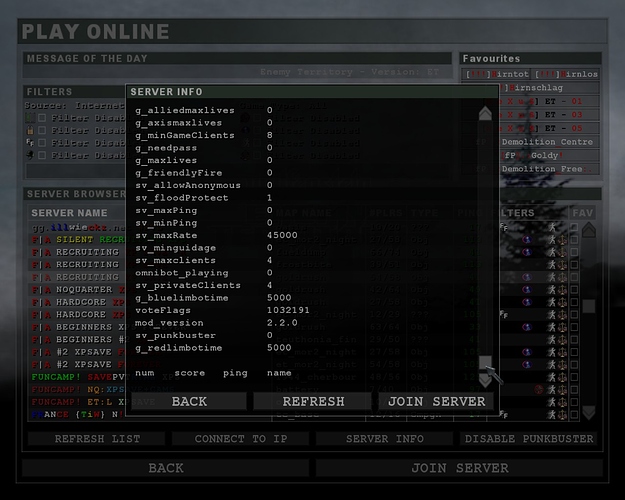 As you can see, the server seems empty, which it is, but somehow by faking information sent to the Master list, the server still shows 54/58, so of course people connect, and this is what ALL the six servers framed in the first picture ask the players. 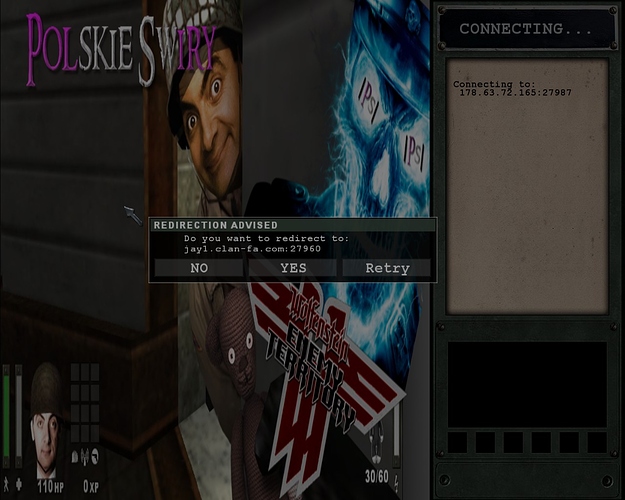 They ALL redirect players to the same server, mentioned above… Please ID, fix this!

>Please ID, fix this!
I understand your frustration but it’s best to not get too worked up over this, id nor anyone else will fix anything because the game is “done” and has not received any work since the last update in 2006, the master server isn’t work it’s just left ticking on as a courtesy.

Okay I do understand there won’t be any action coming from ID as the game is obviously not worth anything anymore for them, but I don’t understand why noone seems to get that upset about it in the community. The game is still played by many, and it should be normal to let people decide by themselves where they want to be playing, and not trick them into going to some specific place…

I think most people who have been playing a while are just used to it by now and know to avoid those servers. I don’t even look at the server browser more than a 5 times a year because I only play on a couple of servers and have shortcuts to directly open the game and connect to them, I check their activity via trackbase and know many others who do the same, it’s better than being upset for years about something we have no control over, unfortunately.

Well if FA’s is creating these redirect servers, and you want community to take actions, it’s better to move that discussion on their forums, and make it clear to them that it is not ethical to act such way?

https://fearless-assassins.com/topic/91250-server-redirection-srv/ this?
This seems to me as complete opposite to what you have written here. You are asking for the access to the “cool feature” in the thread over there, and put people to awareness about its threat and its unfairness over here. I have seen there no concerns described here. More over, what i have read is that you are trying to get knowledge to do the same what FA did so you could promote own servers. Is this hypocrisy?

Well I thought a different approach might have been necessary to get any information that’s all.
But anyway, if someone could close or delete this thread, I’d be grateful

Will be posting how to do this in the next few days, pretty simple and well rip ET.

The master server is only intermediary, a service providing only ip and port information of alive servers. Here is how it works:

See the flaw? On step 2, your client (et.exe) asks for information of each server it has received for the master list. What FA is doing is putting a listener server on this ip + port and send you fake information back, making it look like the server is full. Master server can’t do anything about this.

A fix? Hard to do? Basically it requires id to make all servers proprietary again, which is not going to happen.

Another fix? Probably some server spy detecting redirects. Easy to implement, but not going to happen.

Point of sense being? Start a server with right balance of settings, survey what people get most from. Work on it > progress. Whoever gets under back door should sleep in bed with the big lady.

Point of sense being? Start a server with right balance of settings, survey what people get most from. Work on it > progress. Whoever gets under back door should sleep in bed with the big lady.

so what should I do?

Etric. Take a piece of paper, draw a plan schedule, think twice what you can do and what you can not afford, work on setting a mod by your own, get some friends to playtest with, accordingly fix whats broken to players. And have a nice work flow. You need a solid patience and love for the game in doing this, else no point in starting.