Looking for help in finalizing and optimizing my map project

I am looking for an experience mapper to help me in finalizing and optimizing my map project.

I would need help in optimizing existing brushes and add some vis blocking Hint brushes.

The map currently has a hunkmegs problem for player that use default 56 hunkmegs and i think it has too many portals. My Vis phase compilation take around 5-6 hours.

The PK3 file can be downloaded here :https://fearless-assassins.com/files/file/1936-decay_b6/ 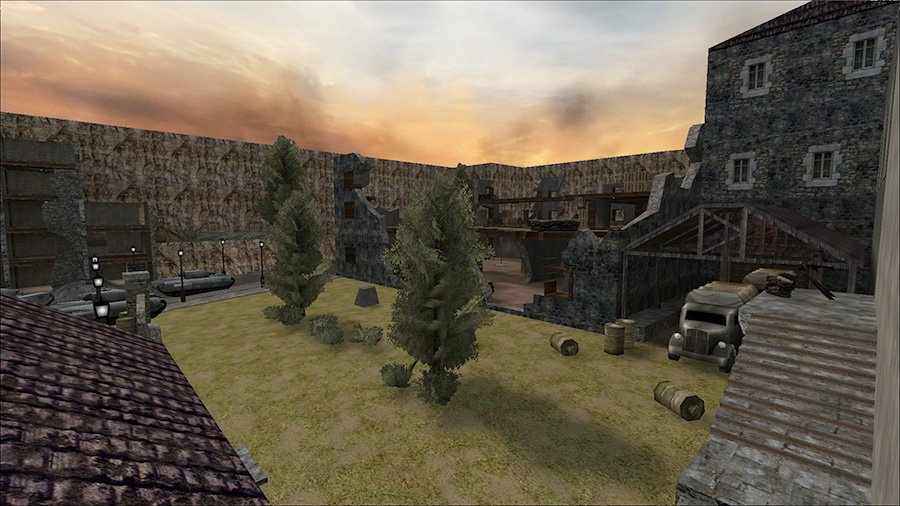 I had a look at the map and it looks good so far. It’s always nice to see other ET mappers at work.

Generally, you don’t need to worry about hunkmegs. Hunkmegs is the amount of megabyte that the game may reserve on a players RAM. Just because some players make the unreasonable decision to not increase their hunkmegs doesn’t mean it’s a problem of your map.

The open area that is also visible in the screenshot above is very problematic. In some areas your tris count (amount of triangles the game has to render) is close to 60.000. You should generally aim for values below 30.000, but you can get away with values of close to 40.000 depending on the size of the area.
From flying around in the map, I didn’t find good positions for structural mesh in your map, so i suggest to try and drastically reduce the amount of triangles. Possible starting points are the lamp posts, maybe only keeping every other lamp post would be enough? Also the amount of sandbags and tanks is very heavy on the tris count, so I suggest to try and remove a few models here and there. 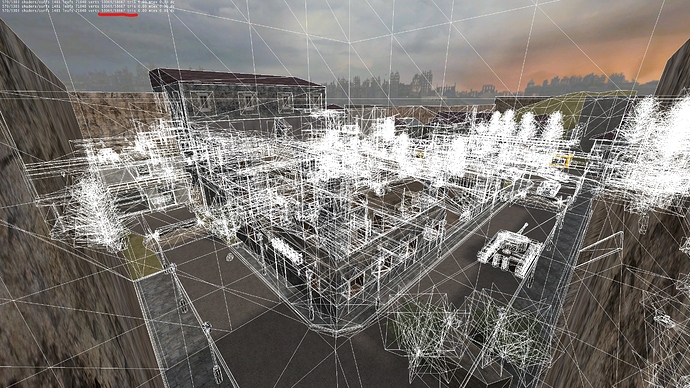 You can identify objects that are costly for tris count by using /r_showtris 1. You can display the tris count per active scene with /r_speeds 1 and /con_drawnotify 1. If you want to, you can fly around the standard maps and some well-played custom maps with that enabled to get a feeling for the range of those values.

A vis compile of 5-6 hours is highly problematic. I take it most of your brushwork is structural, I suggest to detail everything that is not being used to split your map layout up into separate rooms. There are a few tutorials for ‘VIS blocking’, ‘hint brush placement’ and ‘structural vs detail brushes’ on the internet. Maybe that would be a helpful read. To get a feeling for the effectiveness of your structural mesh you can use /r_showtris 2. That displays everything the engine has to render at the given moment in a wireframe mesh. If you get the feeling that rooms should not be rendered that are being rendered, you can try and work on those in particular.

I’m sorry I couldn’t be of more help, but I suggest starting with detailing all brushes that are not separating your map layout into different rooms and by reducing the tris count in the most problematic areas.

@KeMoN
Thank you for your advises, I will make more brushes into details and work on this.
Will post my results once I’m done and I make a new compile.
Cheers