Small update to let you know that there is still active development on maps. After Frostbite, by Moonkey, we have Bergen, by Detoeni.
Below are 4 sneak-peeks of the first test compile of the terrain blending. Still a few faulty triangles left, but overall it’s on a good way.

[QUOTE=KeMoN;570327]Small update to let you know that there is still active development on maps. After Frostbite, by Moonkey, we have Bergen, by Detoeni.
Below are 4 sneak-peeks of the first test compile of the terrain blending. Still a few faulty triangles left, but overall it’s on a good way.

Nice work. Keep it up!

It is with great pleasure that today we can finally announce the newest feature that will make it into the next version.

Given the recent uprising of Battleroyale games, we certainly didn’t want to miss out and therefore moved the primary development focus on implementing a Battleroyale gamemode into ET: Legacy. It will be introduced in the upcoming 2.76 release. We hope that you are as happy as we are, since this is a truly huge opportunity to attract new players to ET: Legacy

Features:
• Based on the original Last-Man-Standing gamemode
• No more teams, but Free-For-All
• So far it only supports the 6 standard maps
• Playercount will change depending on the map-size
• You can now collect all weapons you find. No limit.
• Introduced several power-ups from RtCW, like Health-packs, Flak-Jacket, weapon-specific ammo Nice work, Kemon. Having powerups present would definitely change the gameplay, hopefully for the better!

A belated happy 15th anniversary to Wolfenstein: Enemy Territory.
For a videogame this age is amazing and I’d say it has aged quite well. Considering the years that have past, there is still a rather big player base left. Partly due to the slim, but perfectly executed gameplay, partly due to the incredible amount of custom modifications that have been created throughout the years by the community.

To celebrate this fact @TITEUF-85 has created an anniversary trailer showcasing the state of the original game with direct comparison to the renderer2 and its custom assets that will be featured in the upcoming 2.76 "The enemy is weakened! release.

We have more candies for you today – a real-time comparison video footage, showing the evolution of the game’s textures in the next version of this wonderful mod, in the Goldrush map, right below!

More ET: Legacy real-time comparison videos are on the way! You can check the schedule right below for more information. 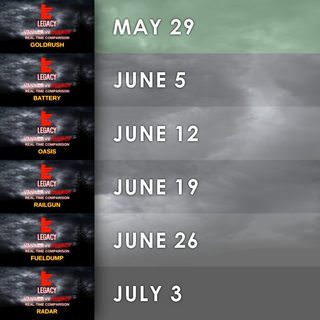 If anyone is interested I’ve created a Docker image that set up an etlegacy server and easily exposes the etmain folder so that you can easily add custom maps, configs etc.

‘Another round of updates for the map overhauls’

It’s time for another round of updates for all four existing map overhauls. This time, the changes are ranging from quality of life improvements to fixing game breaking bugs.

The last version of ‘Bergen, by Detoeni’, unfortunately, contained an incorrectly named entity which caused the game to crash. This has now been fixed along with the addition of proper footstep sounds on the terrain. These were also not working correctly on the last version of ‘Supply Depot, by ginc’, which has also been taken care of. Aside from that, the map has received substantial performance improvements (huge thank you to hatcher for extensive support) as well as the addition of another optional feature that was requested by ETc.Jay. Server admins now have the option to toggle the truck (in-)vulnerable. By default the truck remains invulnerable as this suits the competitive environment of the map better, but for public play this option now exists thanks to Ensiform who found the perfect way to do this. For ‘Frostbite, by Moonkey’ the focus was on further improving the player collision to ensure smooth movement and gameplay. Huge thank you to Aciz for extensive feedback in that regard. Lastly, ‘Ice, by id software’ did not receive many bug reports so the changes are primarily improving quality of life. The maximum player count on all four maps has been raised to 32 vs 32 and the overall settings for lighting and terrain blending have been adjusted to reduce data and improve performance.

This round of updates, however, is not the end. There are plans for future additions to the maps highlighting key events and famous plays by the community, so keep an eye out for the blog, this forum or ideally come on over to our Discord to always stay on top of things.

Omnibot files can be found on assembla for previous versions, but should be compatible with the latest.