to allowing all accounts access to a single unlocked inventory with every item accessible.

After thinking about this, i dont think thats a good idea.

If there were no levels stored how could ballancing matches work. The ballance is bad as is this would kill the game faster as there would be no ballance

As far as the cards no way either. Some of us busted our *sses for the cards wouldnt feel right letting new players walking in and being handed stuff we worked hard to get from events

If there were no levels stored how could ballancing matches work. The ballance is bad as is this would kill the game faster as there would be no ballance

I mean balance already is mostly random, so it probably wouldn’t be that bad. Sure every now and then you’d get a match where every high level player gets dumped onto one team, but on average it would probably be fairly even. Worst case, we have vote shuffle for a reason, just try for a second time

As far as the cards no way either. Some of us busted our *sses for the cards wouldnt feel right letting new players walking in and being handed stuff we worked hard to get from events

You also have to keep in mind this would be a decision made on DB’s death bed. The devs no longer want to cover the cost of the player data server, so instead of shutting down the game, they give us public accounts so we can still play to some degree. The alternative is that we don’t get to play at all.
SD is a company, them keeping the game up this long is a good PR move, but you can’t really expect that to last indefinitely with player count still dropping.

And would anyone really be angry at this point? Most of the old event cases have been purchasable for ages now and I haven’t seen any angry vet. We had our fun with our hard earned cards back in DB’s glory days. But DB has an average of less than 300 players online at any time now. Who are you really showing off to by keeping those cards exclusive? I get it sucks, but honestly, does it really matter if new players get to have fun in shiny pixels too? It’s just a game

to allowing all accounts access to a single unlocked inventory with every item accessible.

I fully support this and STARRYSOCK’s comments on cards

Take care of all the triggerbots running around too

DB has a lot of very skilled players hanging around, and running into them in combat definitely can seem suspicious if you’re only focusing on every time they chain headshots on you. Look at how they play otherwise, because if they’re good at more than just their aim (ie movement, trickjumps, etc) then they’re probably not cheating.

Idk how things are in other regions, but in NA at least, blatant cheaters are pretty rare. And honestly if they aren’t cheating so much that they wipe out an entire team with one click, then you might as well just treat them as you would an average skilled veteran in combat. Doesn’t really matter if their skills aren’t their own as long as it’s in casual and they aren’t playing any better than a normal good player imo, they’re only really cheating themselves at that point

Please explain to me these one shot body kills lately then…seems to be more and more. I know a lot of good players that play. I’m not the only one noticing this. And if you check youtube on these triggerbots, you’ll see what I’m talking about. I’m sure I’ll get flamed for this.

Well triggerbots don’t one-hit kill. A triggerbot just automatically shoots for you when you mouse over an enemy.
Like @Mc1412013 said too, plenty of 1 hit kill weapons in DB, but also keep in mind if you or your opponent has a bad connection, several quick shots can get stacked up and all applied at once, so it’ll seem like you’re taking damage way more quickly than you should be, sometimes it can even seemingly one-shot you, when really on the other person’s screen they just shot at you normally. And with a lot of servers closing down, people are forced to play on higher ping servers, so naturally that’ll happen more. It can also happen if two enemies shoot you at the same time, since DB doesn’t tell you who did how much damage against you.

Hackers definitely exist in DB, but I’d hardly call it an epidemic like you’re saying.
Either way though, DB uses EAC, a third party anticheat. SD doesn’t run the anticheat themselves. All they can do is ban players that get reported, but that doesn’t do much to stop people from just making new accounts. EAC is the one who actually blocks these cheats, so complaining to SD isn’t really doing any good

Thanks for the info…didn’t realize damage could stack like, does make sense a little. I do know what you’re saying about the shotguns. I rarely ever used them until recently…and I am getting some one shots that I ask myself, how did that happen. So, like other people, I have switched to using the shotgun more because it seems like the only thing where I can counter other’s who are using them. Seems out of whack…

Yeah, shotguns are a meme right now. Fighting against them feels more like RNG in whether or not you die, and even using them feels super inconsistent.
I find it’s not that bad if you’re playing a tankier merc, but if you’re playing someone squishy it’s usually best to use your speed to your advantage and quickly long/walljump to a safe distance before fighting back. Most of the people using shotguns are just low level auras so they usually don’t know how to close the distance that well. Going 1v1 close up with a shotgun as a squishy merc is just rolling the dice

@Frew were into the slightly over a month count down till the end of official servers, so any updates on whats going to happen in terms of eac, progression, updates to main screen of game to include server rental info ect. 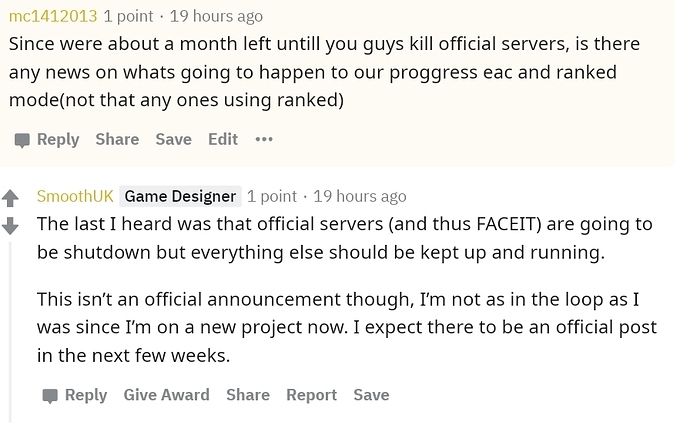 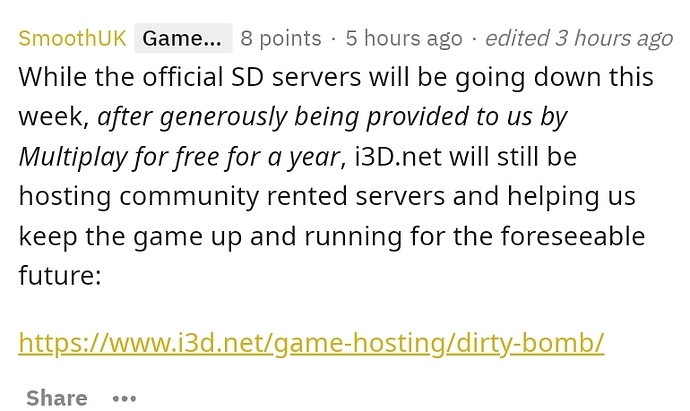 Time to reactivate my i3d server 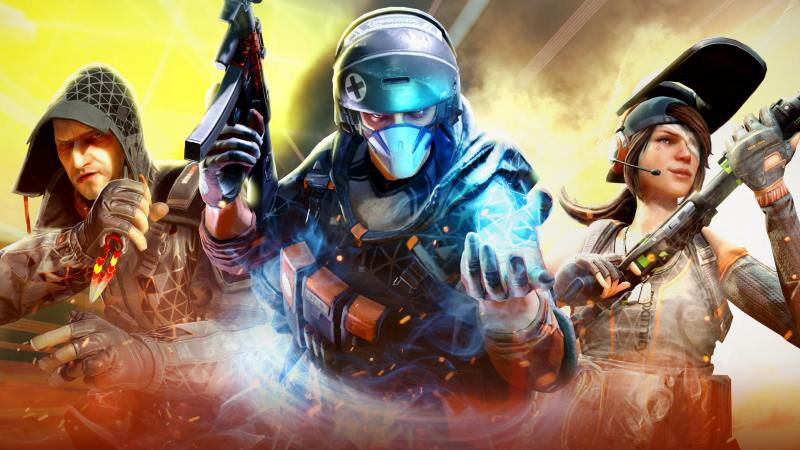 So are i3D doing free community servers for a year?

Would be nice but i had to pay for mine